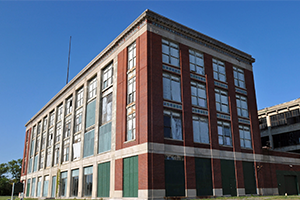 The Highland Park Ford Plant is considered the birthplace of the moving assembly line. Largely designed by noted industrial architect Albert Kahn, the plant from 1910 to 1927 was the scene of numerous advances in the development of mass production techniques which both defined and changed the face of manufacturing.

Although most Americans probably remember Henry Ford best for his Model T, Ford was instrumental in tremendous advancements in organizing newer, cheaper ways to make millions of a single design of automobile. After the founding of the Ford Motor Company in 1903, Ford and his engineers made significant breakthroughs in improving and speeding up auto assembly methods by developing new machinery and placing men and materials on the factory floor in such a manner that bottlenecks were eliminated and production was increased. The enormous popularity of the affordable Model T, introduced in 1908 and built at the Piquette Avenue Plant, led to Ford’s acquisition of 230 acres of land in Highland Park to construct a much larger production facility.

On January 1, 1910, Ford operations were shifted to the Highland Park Plant, and here over the next 5 years the principles of modern mass production were developed. Machines were arranged according to their function in the manufacturing process rather than by type; overhead conveyors, gravity chutes, and belts were used to transport materials from one work station to another so as to bring the work to the man, rather than the man to the work; and each worker's task was constantly simplified by an increasingly minute subdivision of labor.

The great breakthrough at Highland Park came in 1913 when Ford and his engineers developed the continuously moving assembly line. The new production methods developed at Highland Park also made it possible for Ford to substantially increase the wages of his workers. His announcement of the "Five Dollar Day" on January 5, 1914 eventually led to a great wave of new laborers coming to Detroit to search for better paying jobs.

In a sense Highland Park was never completed because of Henry Ford's constant search for cheaper and more efficient production methods, which rapidly made machinery and factories obsolete. By World War I, the entire Highland Park Complex had become outdated in Ford's mind because of the limited acreage available in the immediate vicinity of the plant. By this time, he had begun to visualize the gigantic River Rouge Complex, and in the early 1920's he centered his energies on its construction. Gradually, the Rouge Plant surpassed Highland Park in size and importance, and in 1927 the final assembly line moved to the new facility, although Ford tractors and tractor components were made in Highland Park into the 1970s.