Paradise Valley was a vibrant neighborhood in Detroit during the late 19th and early 20th centuries that was home to Jewish American communities and, later, African American communities.  Today, redevelopment of the former Douglass Homes public housing site provides opportunities to learn from the failed urban development policies of the twentieth century and reveal artifacts and stories of daily life through Section 106 archaeology – all while honoring the history of Paradise Valley. The poster, and this webpage, explore some of what has been learned.

Think about your home and neighborhood. Who has lived here before you? Have you ever found traces of previous residents (for example bricks, plants, or remnants of landscaping, or lost toys and small items like coins)? What do these items tell you about the past in your community?

High School teachers are encouraged to share the 2022 Michigan Archaeology poster with their classes, using this companion guide to help stimulate discussion and provide a framework for asking and answering questions. What can archaeology contribute to the story of everyday people that we cannot find in historic records and documents? 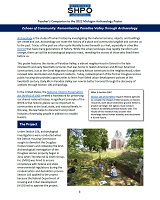 Archaeology is the study of human history by investigating the material remains, objects, and buildings we create and use.

Archaeology can make the history of a place and community tangible and connect us to the past. Traces of the past are often quite literally buried beneath our feet, especially in cities like Detroit that have many generations of history. While the urban landscape may rapidly transform and change, there can still be archaeological deposits intact, revealing the stories of those who lived there before us.

This poster features the stories of Paradise Valley, a vibrant neighborhood in Detroit in the late nineteenth and early twentieth centuries that was home to Jewish American and African American communities. Just as the Great Migration brought many African Americans to the neighborhood, urban renewal later decimated and displaced residents. Today, redevelopment of the former Douglass Homes public housing site provides opportunities to learn from failed urban development policies of the twentieth century. Daily life in Paradise Valley can now be better honored through the discovery of artifacts through Section 106 archaeology.

What is the National Historic Preservation Act?

In the United States, the National Historic Preservation Act (NHPA) of 1966 created a framework for preserving our shared national history. A significant principle of the NHPA is that historic places can be important to communities at the local, state, and national levels. In this way, the law helps to document and protect histories of everyday people in addition to notable leaders.

Section 106 of the NHPA requires federal agencies to consider the impact of their projects on historic resources, both above and below ground. Before a project can be gin, the agency must conduct research to identify potential historic sites. The results of this research may uncover new knowledge about human activities and documents it for the future. Learn more about Section 106.

Under Section 106, archaeological investigations were conducted when the Detroit Housing Commission sought to demolish the Douglass Homes towers and redevelop the land. Archaeological investigation of the Douglass Homes property began in 2012 when The Mannik & Smith Group, Inc. (MSG) was hired to ensure compliance with federal and state environmental regulations during the condemnation and demolition process. Section 106 applied to the project because the federal Department of Housing and Urban Development (HUD) had to approve the project.

MSG’s initial study of the Douglass Homes project area included an architectural assessment of the remaining Douglass Homes public housing units as well as an archaeological sensitivity assessment for what may be underground. However, the archaeological assessment, which involved researching the history of the neighborhood and scouring historic fire insurance and real estate maps of Detroit, resulted in a finding that showed archaeological remnants of Paradise Valley were likely still present within the project area. The Michigan State Historic Preservation Office agreed with this finding, and MSG subsequently conducted archaeological monitoring of select building demolitions in 2013-2014 to document any such remnants. As a result of the monitoring, MSG recorded 30 individual archaeological features across 11 separate archaeological sites.

The Douglass Homes project area sat vacant for several years after the demolition, but in 2018 Bedrock Detroit began the process of redeveloping the property. Bedrock retained MSG as the archaeological consultant for the project, and in 2019 MSG conducted archaeological excavations at six of the archaeological sites that had been documented in 2013-2014. New knowledge based on these archaeological discoveries now sheds light on everyday life in the neighborhood.

Programs and policies, such as redlining and urban renewal, profoundly impacted Detroit communities, and their ripple effects still linger today. Redlining evolved from a 1930s-era Federal housing program that created color-coded “residential security” maps ranking neighborhoods A through D, based on perceived loan risk. These rankings were founded on racial and ethnic biases and resulted in long-term divestment of minority communities and increased segregation of urban neighborhoods.

Detroit, like many northern cities, saw a massive influx of African Americans during a period known as the Great Migration, from about 1920 to 1940. African Americans moved to Detroit to seek economic opportunities in the automotive industry. However, once here, they found their opportunities constrained by redlining and legal housing covenants that excluded them from certain neighborhoods. Many were able to find housing in traditionally Jewish neighborhoods, like Paradise Valley, which did not have covenants blocking African Americans from home ownership.

Under these circumstances, communities like Paradise Valley became the epicenter for Black culture, community, and businesses in Detroit during the first half of the twentieth century. Notable for its jazz scene, Paradise Valley nightclubs welcomed legends such as Duke Ellington, Billie Holiday, and Louis Armstrong as frequent entertainers.

With limited housing options, the effects of redlining led to overcrowded and run-down conditions in the urban core of many cities, contributing to urban renewal practices that further decimated minority communities.

In 1935, the Brewster Housing Project was constructed as the nation’s first federally funded housing project for African Americans. The Brewster project demolished a large swath of the Paradise Valley and nearby Black Bottom neighborhoods, displacing hundreds from their homes and community without their consent. Later, the Douglass Towers projects and Interstate-375 construction further decimated these neighborhoods and Black-owned businesses. These archival photographs depict the scale of each successive redevelopment on a landscape which already contained an existing neighborhood, including homes and businesses:

In 1907, Louis Schlussel opened a Russian and Turkish bath house at the corner of Alfred Street and St. Antoine in what became Paradise Valley. The bath house included Detroit’s first mikveh, or Jewish ritual bath. Schlussel later sold the bath house to fellow Jewish immigrant Julius Rosenfeld, who owned the bath house until its demolition in the late 1940s.

The house located at 452 Saint Antoine Street was built sometime before 1880, when physician Amos Hoke was listed in city directories at this address. City directories from the twentieth century list a series of day laborers and other blue-collar workers at this address. Although race or ethnicity were not noted in these directories, these residents were likely African American.

In Paradise Valley, the transition between Jewish and African American communities was organic and resulted in a diverse and lively neighborhood with its own unique history. Urban renewal displaced and erased the original community. However, memories and material artifacts uncovered through careful archaeology are painting a more complete picture of everyday life in a once vibrant neighborhood.