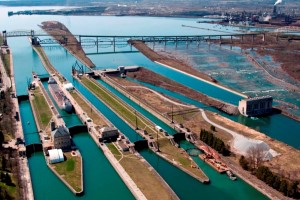 The Soo Locks Historic District (Saint Mary's Falls Ship Canal), encompassing the shipping canals and locks and hydroelectric facilities at Sault Ste. Marie, is historically significant for several reasons. The property is important for its contribution to the industry and commerce of the entire United States by providing an inexpensive and convenient transportation route to and from the upper Great Lakes, long the source of iron ore, copper, grain, and timber which helped shape the industrialization of America. The locks are significant engineering feats, having required much time, organization, technology, and capital investment to design and operate them. Several buildings on the locks property possess architectural significance for their continuity and elegance in design, as well as being the work of master architects. The history of hydroelectric power in the Soo Locks Historic District is also significant, as it is the site of a very early hydroelectric plant, and hydroelectric power is still generated today. The locks have also been an important commercial, tourist, and recreational site since the first lock opened in 1855, and continue to be so today. (Provided photo courtesy U.S. Army Corps of Engineers)