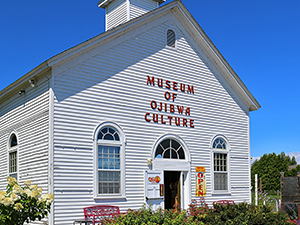 The French mission believed to have been established on Mackinac Island around 1671 was moved in the following year to the mainland on the northern shore of the Straits of Mackinac. The mission was under the supervision of Jesuit Father Jacques Marquette, and the mission, a nearby fort and the French village which grew up at the site became a center of the flourishing fur trade which developed around the Straits of Mackinac. It was here in 1673 that Marquette joined the explorer Louis Jolliet for the journey which was to trace for the first time the broad stream of the Mississippi from its upper reaches in Wisconsin to the mouth of the Arkansas. On his return north from the voyage down the Mississippi, Marquette, worn by exhaustion and illness, remained in the Illinois Country hoping to found a mission there. In 1675, feeling that his death was near, he set out for the Saint Ignace Mission but died and was buried en route. Two years later, his remains were carried to Saint Ignace in fulfillment of his wish to be buried at that mission.

The Saint Ignace Mission was maintained until 1706 when it was suspended. In 1712 in was reopened and served the region around the Mackinac Straits until, in 1741, it was moved again, this time to the south shore of the Straits.

In 1877, what have been identified as Marquette's remains were discovered at Saint Ignace and reburied on the site of the Mission chapel. Although the authenticity of the site has been questioned, general opinion now credits the location as being the correct one.

The mission site is now open to the public as the Museum of Ojibwa Culture.