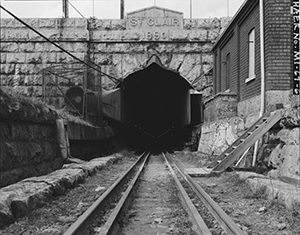 The St. Clair River Tunnel (also variously known as the Saint Clair Railroad Tunnel, First International Tunnel, Grand Trunk Tunnel) links Port Huron, Michigan with Sarnia, Ontario by crossing beneath the St. Clair River. Portal to portal, the tunnel is 6,026 feet long. In addition to the underground portion of this property, open cut approaches run in a gradual decline from grade level to each portal, at a point approximately fifty-five feet below grade. The length of these approaches, 3,500 feet on the Canadian side and 2,700 feet on the U. S. side, brings the total length of this property to 12,226 feet. The portals are made of rough-cut limestone, and are about 140 feet wide and thirty-six feet tall. Low retaining walls flank the tracks along the approaches. The underground portion of the tunnel lies beneath thirty feet of water, plus another five to twenty feet of clay, gravel, sand and mud. The tunnel proper is constructed of arched cast iron segments, each weighing more than 1,000 pounds, which measure about eighteen inches long, twelve inches wide, and two inches thick. Thirteen of these cast iron segments, plus a smaller arch key segment, are bolted together to form a twenty-foot-five-inch diameter ring of the tunnel lining. A succession of these rings are bolted together to form the more than one mile-long tunnel lining.

The St. Clair River Tunnel is nationally significant as the first full-size subaqueous tunnel built in North America. Prior to its completion, a railroad had never been able to pass beneath a river. This accomplishment was not possible until engineers learned to combine three elements of tunnel construction (the shield method of excavating, the cast iron tunnel lining, and excavating in a compressed air environment). The St. Clair River Tunnel is important in the history of engineering because it was the world's first true test of the feasibility of constructing railroad (and later vehicular) tunnels through the soft, porous ground commonly found beneath rivers. This engineering advancement had an impact on our nation's broader historical development by breaking the rail transportation bottleneck which was caused by the difficulty of crossing the wide rivers upon which most of our major population centers were located.