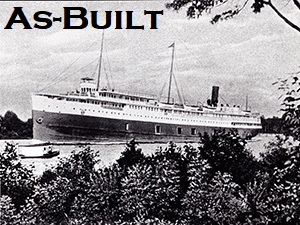 Built in 1904-1905, and substantially rebuilt in 1940, the steamship S.S. Milwaukee Clipper is the oldest United States passenger steamship on the Great Lakes. The ship was originally built as the S.S. Juniata by the American Shipbuilding Company for the Anchor Line of the Erie and Western Transportation Company, a subsidiary of the Pennsylvania Railroad. The Juniata worked for the Anchor Line until 1915, when an anti-monopoly act was passed forbidding railroads to own steamship companies. It was sold to the Great Lakes Transit Corporation and continued to carry passengers and freight on the Great Lakes until 1936, when increased safety regulations caused it to be laid up or face substantial rebuilding. The ship was purchased in 1940-1941 by the Manitowoc Shipbuilding Company who rebuilt it to surpass safety rules and standards of accommodation, and was given the new name S.S. Milwaukee Clipper as well as a new, more modern streamlined appearance. It was put back into service in 1941 carrying passengers and a cargo of strictly automobiles between Milwaukee and Muskegon, Michigan. This service continued until 1970, when it was laid up at Muskegon. In 1977 the vessel was sold to the Illinois Steamship Company and towed to Sturgeon Bay, Wisconsin, and later to Navy Pier in Chicago. While in Chicago, it served as a restaurant and nightclub for several years. In 1998 it was moved back to Muskegon, and is now owned by the S.S. Milwaukee Clipper Preservation, Inc., a non-profit organization which has reopened the vessel as a floating maritime museum.