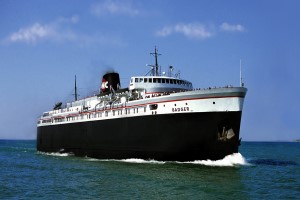 The S.S. Badger is nationally significant in transportation and maritime history for her role as a waterborne link in continent-wide rail and road transportation, the latter a role she still serves, and as the last Great Lakes carferry still in operation. Badger also possesses a national level of significance in engineering as the final example of Great Lakes rail carferry design, a type which influenced design of such vessels in other regions and around the world, and for the coal-fired propulsion system, now unique in the nation and believed to be unique in the world, consisting of water-tube boilers supplied with coal by crushers, conveyors and mechanical stokers, and two steeple compound Skinner Unaflow reciprocating steam engines, the last of the type in existence.

Badger remains in summer service between Ludington and Manitowoc. The transport of cars, trucks, and passengers, once seen by the railroad operators as a secondary source of income, has become the tail that wags the dog as the carriage of railcars has been abandoned and the service concentrated on road vehicles and their drivers and passengers. As the Ludington carferries have done since highway numbers were established in 1926, Badger continues to link the eastern and western segments of highway US 10, the water crossing becoming an official Continuance Route of the highway in 2015.