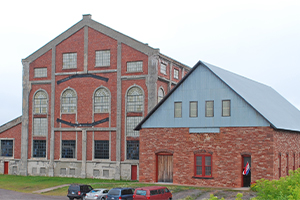 The Keweenaw Peninsula, approximately fifty miles long and fifteen miles wide, lies at the northernmost tip of Michigan's Upper Peninsula as it juts out into Lake Superior. The copper range forms a narrow spine along which some four hundred copper mining companies operated between 1872 and 1920. Copper occurs in this district in fissure deposits in a pure metallic state, unalloyed with other elements. The remains of hundreds of ancient diggings, excavated by prehistoric miners, led nineteenth-century explorers to these mass copper deposits. These deposits were first mined in the early 1840s, setting off a boom which spurred settlement of Michigan's Upper Peninsula. This boom brought experienced miners from the copper mines of Cornwall, England. Then at its peak and the world leader in production, Cornwall would soon be eclipsed by Michigan.

The Quincy Mining Company represents an outstanding example of the growth and development of the United States copper industry from its earliest years through 1920. Of the numerous mining ventures spawned by the nation's first copper boom, Quincy alone survived. It was the first company to recognize the limits of fissure mining and shift to amygdaloid beds, which, with the conglomerate lodes, were the low mineral-content rock upon which the future of the copper range district of the Keweenaw Peninsula depended. The company earned the title "Old Reliable" for a fifty-four-year sequence of dividends paid to its stockholders and its ability to continue mining during economically difficult times when all but the giant Calumet and Hecla had shut down.

Situated on the Pewabic amygdaloid lode, the Quincy location stretches northeast to southwest along the brow of a long hill above the city of Hancock and Portage Lake. Although all of the shaft-rockhouses (headframes) except No. 2 have been removed, the shafts are still evident, fenced off for safety. Some of the associated surface works have been torn down, but many structures stand, while several others remain as significant ruins. Smokestacks from the boilerhouses punctuate the hillside, while abandoned railroad trestles and narrow gravel lanes are expressive of patterns of work and community life at the location. Built in 1898, the smelting works juts out from the shoreline of Portage Lake.