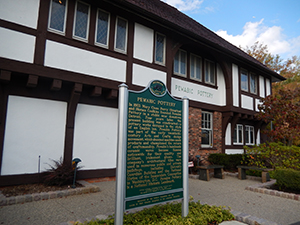 While still a young woman in Detroit, Mary Chase Perry developed an interest in china painting. In spite of her lack of formal training, she soon became proficient enough to establish a teaching studio and to deliver lectures on the art of painting china. As Miss Perry entered her late thirties, a new interest in ceramic pottery and a stroke of good luck brought her to the threshold of what was to become her national reputation as a ceramist and artist. Just as Mary Perry entered her lengthy experimentation with ceramic glazes, she discovered that a neighbor, Horace James Caulkins, had recently developed a new high-heat furnace for firing dental products. The two soon formed a close association in the development of ceramic glazes. Architectural tiles produced by the Pewabic Pottery can be found in distinguished buildings throughout Michigan and the United States.