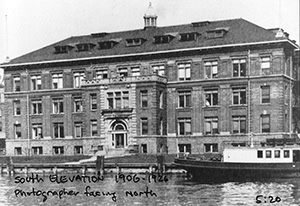 Pharmacology, the study of the changes produced in animals by chemical substances and especially the study of drugs used in treating diseases, has long been an important area of pure or basic scientific research. In the United States the development of pharmacological research began after the Civil War in the medical schools and in the laboratories associated with the drug companies. Along with the electrical and chemical industries the drug companies were among the first industries to introduce the pursuit of basic research as a company policy.

Parke-Davis and Company of Detroit, Michigan, was the industrial leader in the development of pharmacological research in the United States. In 1902 Parke-Davis built the first industrial laboratory devoted exclusively to pharmacological research, on the shores of the Detroit River. Greatly expanded over the next 25 years, the research and manufacturing facility marked the institutionalization of a pure science research activity which has been responsible for many of the "wonder drugs" that are today taken for granted. Much of the former Parke-Davis complex buildings are listed in the National Register, but Building 55, the Research Labratory building, is recognized at the National Historic Landmark level for the innovation and discovery which took place here.