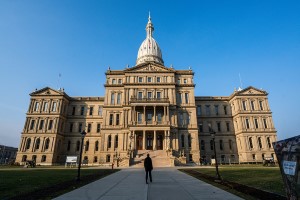 The Michigan State Capitol has served as Michigan's seat of state government since its completion in 1879. The Michigan capitol was the first of three state capitols designed by Elijah E. Myers in the 1870s and 1880s. Its successful completion established Myers' reputation as the premiere capitol-builder of the post-Civil War period, and secured his career as one of the country's most successful architects of public buildings. No architect was responsible for more state capitols than Myers, and no single architect had more influence on their design in the latter years of the nineteenth century. Myers was among the first to use the national capitol in Washington, D.C., as a model, and his design for Michigan would help establish the standard for state capitols for decades to come.

The Michigan State Capitol reflected-and inspired-the national trend after the Civil War for monumental fireproof buildings, constructed to house state governments growing in size and complexity, as well as to serve as suitable repositories for mementos of the war itself. The interior embellishment of the Michigan State Capitol, undertaken over a period of several years after the dedication and occupation of the building, involved the extensive use of decorative, or architectural painting. So skillful and elaborate were the techniques and patterns employed, and so effective their color palette, that the building, as now restored, ranks today as one of the best surviving displays in the United States of the Victorian painted decorative arts. An extensive historical restoration, begun in 1987 and completed in 1992, returned both the interior and exterior to their original appearances, while adapting the building for the future as Michigan's permanent state capitol. A multi-phase restoration and renovation project began in 2014 to further conserve and restore architectural elements, interior artwork, and upgrade or replace building systems and infrastructure. It will culminate with the addition of Heritage Hall, where future capitol tours and events will originate.

Guided and self-guided tours of the State Capitol are available free of charge as a service by the State of Michigan. Use the links below to learn more.