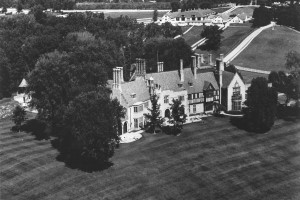 With its monumental Tudor Revival residence, secondary buildings (many of which are also in the Tudor Revival style), and structures set within an intact pastoral landscape, Meadow Brook Hall is an outstanding example of a twentieth-century American country estate. This property epitomizes the luxurious country estate which displayed its owner's wealth through imposing architecture, large land holdings, and an extensive agricultural complex. With most of its secondary buildings and landscape features preserved, the Meadow Brook Hall estate is an exceptionally well-documented example of the American country estate of the 1920s with exceptionally high integrity.

The Meadow Brook Hall estate, which at its peak included approximately 1,400 acres, was once owned by Matilda Rausch Dodge Wilson. Matilda Wilson, with her second husband Alfred G. Wilson, developed and expanded the property beginning in 1926. The Wilsons continued the work begun by Mrs. Wilson's first husband, automobile manufacturer John F. Dodge who purchased the original 320 acres in 1908. Dodge, before his death in 1920, expanded the existing farmhouse, constructed a nine-hole golf course and clubhouse to the south of the farmhouse and began planning-but did not realize before his death-a large residence, formal gardens, and the secondary structures requisite for a large country estate. Following their marriage in 1925, the Wilsons developed an extensive farming operation on the property with an award-winning herd of cattle, stables, dairy, poultry group, and crop cultivation. Meadow Brook Hall, a country house based on the Tudor Revival style, was constructed between 1926 and 1929. The residence was designed by William E. Kapp of Smith, Hinchman and Grylls in Detroit, Michigan. Landscape architect Alihur E. Davidson drew up the landscape plan between 1928 and 1929; subsequent development and execution of the designed gardens and associated landscape occurred over the course of the next three decades at the direction of Mrs. Wilson with assistance from her architect William Kapp. The combination of the massive country house, associated formal gardens and designed landscape, distinct agricultural areas, and outlying pastures and woodland, made this country estate one of the most elaborate in the nation.

The Meadow Brook Hall estate must be viewed in the larger context of the American country estate in the twentieth century. The economic expansion and technological transformations in the early twentieth century created new sources of wealth that were expressed in the establishment of largely unprecedented country estates complete with baronial residences, constructed landscapes, and agricultural complexes. Wealthy Americans created these vast estates in part to give the illusion of self-sufficiency and to imply a claim as landed gentry. Historian Clive Aslet has noted that the English country estate model appealed to wealthy Americans because it created "the appearance of an independent, possibly self-sufficient, landed life, even though the money that supported it never came from the land." Meadow Brook Hall is a nationally significant architectural representation of the dramatic economic expansion and cultural values of the twentieth century. The strong desire of the original owner Matilda Wilson to execute the Tudor Revival aesthetic using exclusively American materials and craftsmen further distinguishes this property.