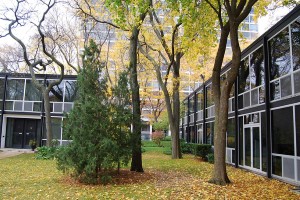 Lafayette Park is nationally significant under National Historic Landmark (NHL) Criterion 1, as one of the best and most successful examples of a residential urban renewal development in the nation, and NHL Criterion 4, as the collaboration between one of the twentieth-century’s most influential Modern architects, Ludwig Mies van der Rohe, and developer Herbert Greenwald, planner Ludwig Hilberseimer, and landscape architect Alfred Caldwell. It is also the largest collection of Mies van der Rohe designed buildings in the world. One of the first planned urban renewal projects in the country, Lafayette Park was and has remained one of the most fully realized and most successful urban renewal developments of the mid-twentieth century. The site, an excellent example of the “superblock” urban planning ideal married with the principles of International style architecture and Prairie style landscape design, remains highly intact and reflective of its period of significance.