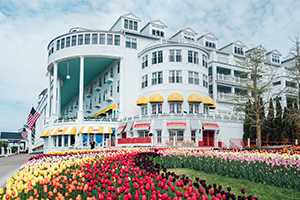 "In 1882 U.S. Senator Francis B. Stockbridge of Michigan purchased the site of the hotel and formulated a scheme to finance its construction. He created interest in the building and the oversight of the operation of the hotel among the three major transportation companies that served the island and that wanted to promote the use of their transportation systems. Thus, the Detroit and Cleveland Navigation Company, the Michigan Central Railroad and the Grand Rapids and Indiana Railroad formed the Mackinac Island Hotel Company, which, in turn, built the hotel in 1887. To build the hotel, the stock company commissioned Charles W. Caskey, an architect-builder who had come north to Harbor Springs from Allegan, Michigan, to take part in the building rush in the resort communities of northwestern Lower Michigan in the 1880s. Caskey executed plans prepared by George Mason of Mason and Rice in Detroit. The company leased the operation of the Grand Hotel to managers and firms experienced in operating hotels in New England and elsewhere. Among the wealthy Midwesterners assembled at the Grand Hotel for its opening in 1887 were the lumber barons the Algers, Newberrys and Blodgetts; the Potter Palmers and Marshall Fields; and the meat packers, the Armours and the Swifts."*

The Grand Hotel remains one of Michigan's most popular architectural attractions and is known for the world's longest porch.

*Excerpted from the book Buildings of Michigan, by Kathryn B. Eckert, published by Oxford University Press.