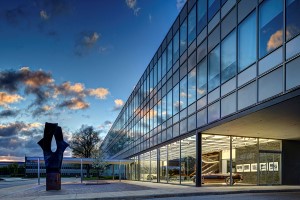 The General Motors Technical Center, commonly known as the GM Tech Center, is nationally significant as one of the most important works of architect Eero Saarinen (1910-61). GM Tech Center represents several key aspects of Saarinen’s career. First, GM Tech Center marks his emergence onto the international stage as an important designer independent of his work with his father Eliel, first bringing him to wide national attention and acclaim. This project was embraced around the world as the embodiment of the spirit of the post-World War II age in America and of the prosperity and modernity of the nation and its people. Second, this campus represents Saarinen’s work not just as a creator of buildings, but as the planner/designer of total environments. At GM Tech Center, Saarinen worked with and orchestrated key collaborators on the campus’s buildings and their material details, construction methods, landscape, furniture and furnishings, and artwork, creating a design totality unparalleled in the period. GM Tech Center is the first of a series of four Saarinen suburban corporate campuses (along with later projects for IBM, Bell Laboratories and John Deere), that set the design standard for this important post-World War II landscape and architectural type that represented a sea change in American business.