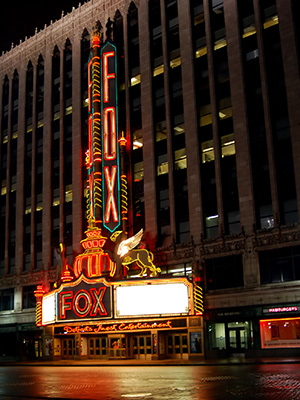 Built for William Fox (1879-1952) and the Fox Theatre chain, the Detroit Fox is the largest and most exotic eclectic Hindu-Siamese-Byzantine theater of the golden age of the movie palace (1925-1930). The Fox stands today, along with its 1929 twin, the Saint Louis Fox Theatre, as one of the relatively few remaining movie palaces in the country of this era. It epitomizes the opulence and grandeur that characterized the late 1920s.

Designed by C. Howard Crane and built in 1928, the Detroit Fox Theatre is the culmination of flamboyant movie palace architectural design. Crane, who had designed over 250 theaters by 1928, considered the Fox his best effort. In its size, ornate decoration and mechanical systems it was the premier example of what a movie palace could be. A 1928 Detroit Free Press article stated, "Detroit's Fox Theater has the largest clear span balcony in the world. The stage proper is larger than the Roxy Theater in New York, and has the largest and finest projection room and equipment of any theater in the world." Today, the Fox holds the distinction of being the largest continually-operating theater in the country.