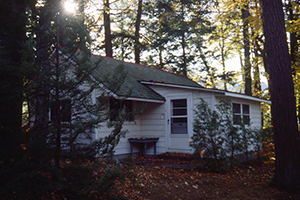 Windemere is a one-story, frame structure that was built as a summer cottage by Ernest Hemingway's father. The cottage is nestled among hardwood trees on the shore of the nearby Walloon Lake. Once located in a remote area of Resort Township, the cottage is now among large, year-round houses.

Ernest Hemingway spent most of his summers until age 21 at Windemere, his family's cottage on Walloon Lake. It was here he first developed his interest in outdoor activities like hunting and fishing, which played an important role in his fiction. Hemingway's time in northern Michigan inspired many of his short stories, including "The Three Day Blow," "The End of Something," and "The Big Two-Hearted River."