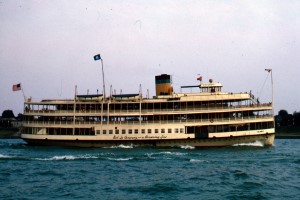 The steamer Columbia represents the typical propeller-driven excursion steamer of the turn of the 20th century, a type once found in many parts of the country. Excursion steamers are steamships built primarily for passenger day trips. Columbia and her running mate Ste. Claire represent the "ocean-going" type of excursion vessel, although they were used on the Great Lakes. The steamer Columbia is significant as one of the last pair of classic excursion steamers in the country; as one of the two last essentially unaltered ships designed by Frank E. Kirby; as one of the two last vessels of the Detroit and Windsor Ferry Co.; as one of the few surviving vessels built by the Detroit Dry Dock Company, and for its unaltered propulsion machinery, which is of a rare type. Columbia is the oldest passenger steamer in the United States, excepting vessels properly classed as ferries.

NOTE: The steamer Columbia was towed to Buffalo, N.Y. in 2015 as part of a long-term restoration effort which will one day bring it to the Hudson River. At this time, Columbia is still classified by the Department of the Interior as a Michigan-based National Historic Landmark.