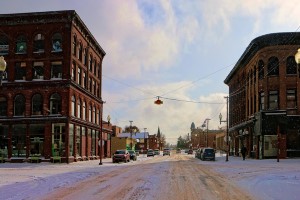 Under the direction of Alexander Agassiz, Swiss-born, Harvard-educated scientist and son of the world-famous geologist, Louis Agassiz, the Calumet and Hecla mining companies merged in 1871 into the Calumet and Hecla Mining Company. The original companies had organized in 1864 and in 1866, respectively, to work one of the richest copper deposits in the world. Using the financial backing of Boston investors, along with his own managerial skills and technical knowledge, Agassiz made C&H the dominant mining company in the Copper Range. In the 1870s it mined 50 percent of the nation's copper.

Calumet became the most civilized community in the Copper Country. The district includes the sites and properties that represent major elements of Michigan's copper industry in the Keweenaw Peninsula: mining and mining technology, immigration and ethnic settlement, paternalism and company towns and labor organization.

The Keweenaw Peninsula, approximately fifty miles long and fifteen miles wide, lies at the northernmost tip of Michigan as it juts out into Lake Superior. The copper range forms a narrow spine along which some four hundred copper mining companies operated between 1872 and 1920. Copper of this district occurs in surface fissures in a pure metallic state, unalloyed with other elements. The remains of hundreds of ancient diggings, excavated by prehistoric miners, led nineteenth-century explorers to discovery of mass copper deposits. These deposits were first mined in the early 1840s, setting off a boom which spurred settlement of Michigan's Upper Peninsula. The international consequences of this boom brought experienced miners from the copper mines of Cornwall, England. Cornwall, then the world leader in production, would soon be surpassed by Michigan.