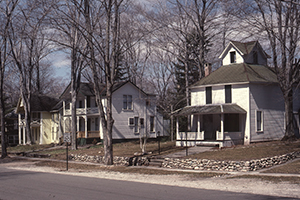 Bay View, Michigan, is one of the finest remining examples of two uniquely American community forms: the Methodist camp meeting and the independent Chautauqua. Designed for the first purpose in 1876 as the county’s only romantically-planned campground, and adapted for the second from 1885 to 1915, Bay View constitutes an extraordinarily well executed ideal Victorian community which, because of its continuing corporate existence and, most important, the ongoing collective values of its membership, remains in an excellent state of preservation in both form and spirit. Bay View is a major monument of American religious, cultural, social, and educational ideals embodied in an artistically shaped community plan with 437 contributing resources.

Bay View is set on the northern half of a heavily wooded tract of 338 acres which cascade in natural terraces from a 200-foot elevation down to Little Traverse Bay. While the heart of Bay View is the Tabernacle Park/Campus with its tiny and grand institutional buildings, its body is the array of more than 430 cottages housing the families who summer there. Most of these are late Victorian or early twentieth century structures, usually in a good to excellent state of preservation because of the sense of tradition of the occupants and because they have never been winterized.

One has an immediate sense of entering a special precinct when approaching Bay View. The first view is of a row of cottages on a raised terrace. These houses are all lined up close together on their fifty-foot plots and imbedded in green from the trees crowding the site. The density of both buildings and foliage and the uniform maintenance of such similar houses, without fences to keep them apart, announce a district which is different from the commercial highway strip preceding it and from almost all other residential neighborhoods. Bay View looks like an unusually green, substantial, and well-maintained version of its historic kin: Methodist Camp meeting resorts such as Wesleyan Grove on Martha’s Vineyard, Massachusetts; Ocean Grove, New Jersey; or Lakeside, Ohio.